Rebase(named after git's rebase) is re-mining blocks based on another block. In other words, transactions are re-executed based on other parent block. Even after rebase, trasactionsRoot of block remains to be unchanged. However,stateRoot and receiptsRoot can be changed because the specific results of each transaction may vary.

Cycle is an entire operational period of the Plasma EVM. Cycle consists of a total of four stages. The stages in order are pre-commit, DA-check, commit, and challenge.

Pre-commit is a preliminary submission step, and the operator mines and submits transactionsRoot of blocks to the root chain. However, for request block, since transactionsRoot is determined by the RootChain contract, it is not necessary to submit the merkle root again to root chain. The operator also propagates those blocks to users at the same time. If the operator sends incorrect block data at the pre-commit stage, or if the entire block data is not fully available, users must submit an escape request in DA-check stage.

DA-check is a stage in which users check data availability in pre-commit. If they find any problems, users must escape from that chain to protect their assets. If they entered within the same cycle, they must also submit an undo request to cancel old enter requests. In addition, they must cancel old exit requests to prevent double exit.

Commit is the stage in which the operator submits an escape block to apply all requests submitted in the DA-check stage, rebasing all the blocks submitted based on the last block of pre-cycle. All types of roots are submitted in this process.

Stage length is the number of epoch that needs to be processed in pre-commit and commit stage. It is determined by the operator when the RootChain contract is deployed.

Halting condition is triggered if the operator does not properly perform the prescribed procedures of each stage of the cycle for any reason. When halting conditions are triggered, child chains will shutdown.

When the operator fails to submit all epochs of pre-commit length within the pre-commit period, the halting condition is triggered.

When the operator fails to submit all epochs of commit length within the pre-commit period, the halting condition is triggered. This will suspend the progress of all subsequent cycles, including the corresponding cycle. If the escape block has not yet been submitted, anyone can submit it. After submission, the suspended cycle can be resumed.

Shutdown is a plasma chain closing procedure. When shutdown begins, no further cycle in the chain can proceed. When in shutdown, only the following cycle will be repeated: Submit escape request based on last finalized cycle - Submit escape block - Challenge, to ensure that all users can safely exit from the chain.

The operating process of one cycle is presented below. 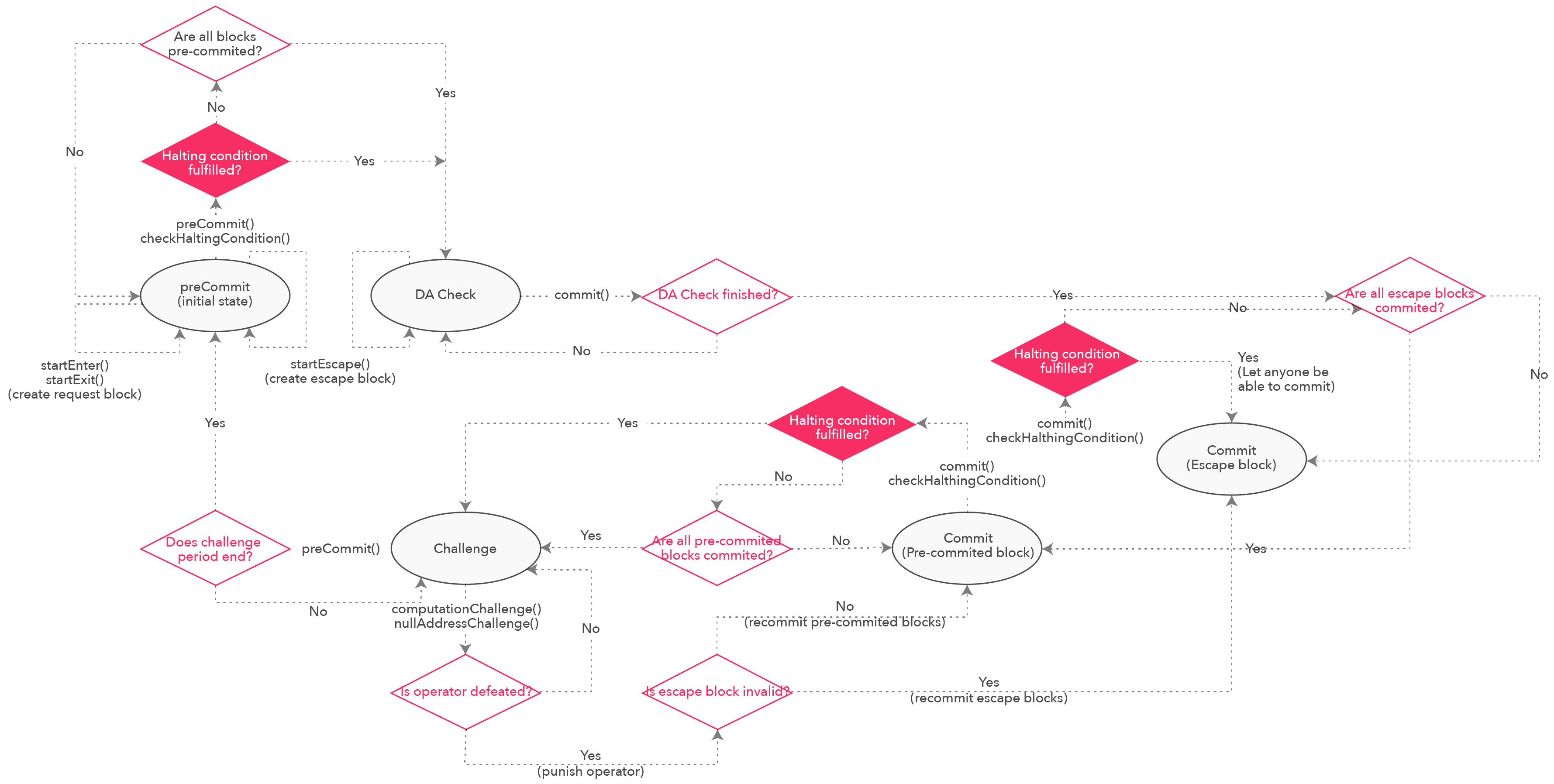 What we have discussed so far is the operational process of only one cycle. But multiple cycles can also be overlapped. 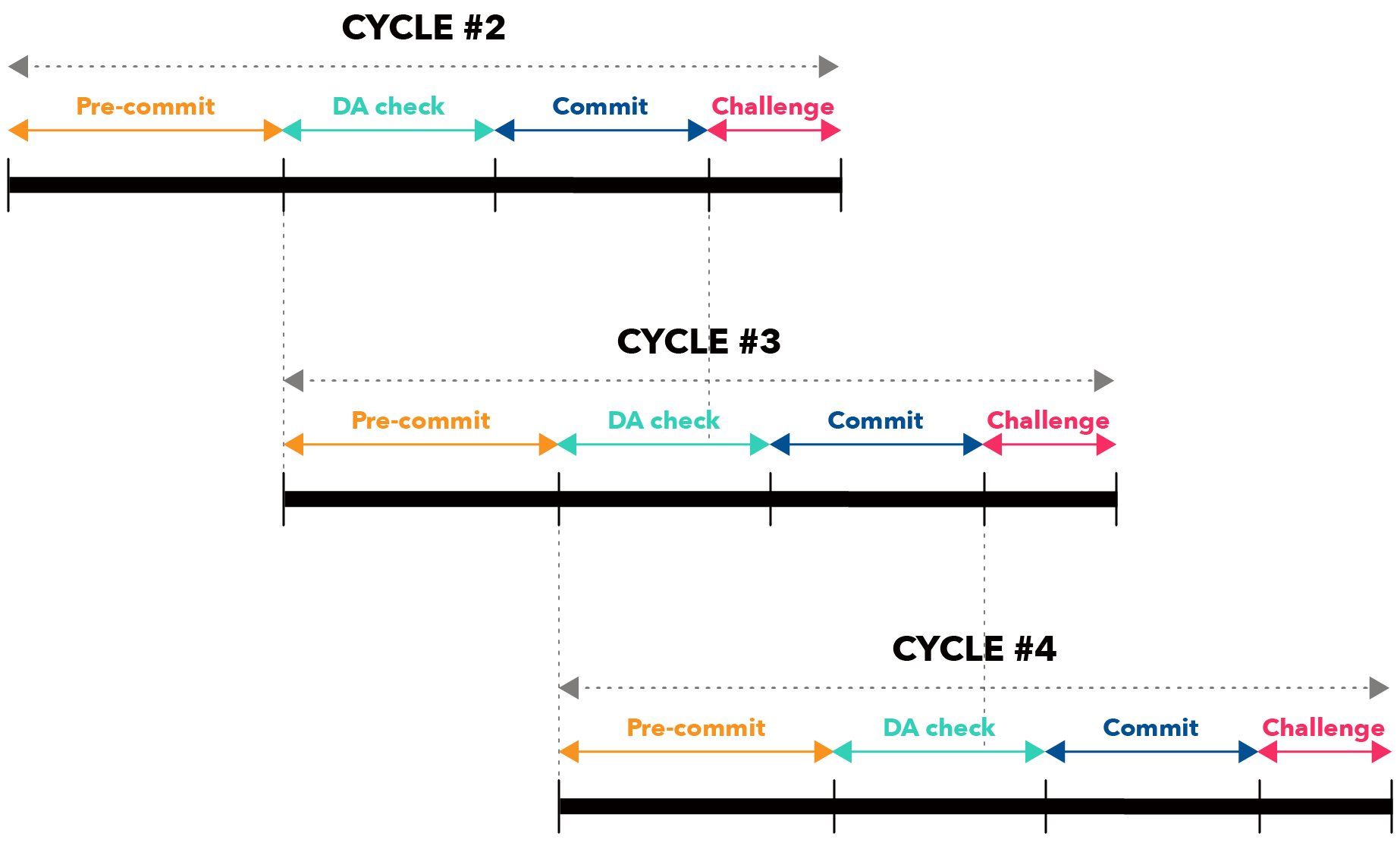 When several Cycles are overlapped, the pre-commit of the following cycle can begin regardless of whether challenge of the previous cycle is complete or not.

In order for cycles to be overlapped, the following conditions must be met:

This will allow child chains to continue to operate without stopping as it is rebased while executing escape requests periodically.